skip to main | skip to sidebar
From Afghanistan to Zambia via Jamaica and Montenegro join Fork and Flag for an epic voyage around the world on a culinary journey through London town. Forget expensive flights, carbon guilt and irksome visa regulations. Trade timezones for tube zones and sample 111 countries through the eclectic cuisine, eccentric waiters, eye-watering decor and evocative entertainment of its restaurants 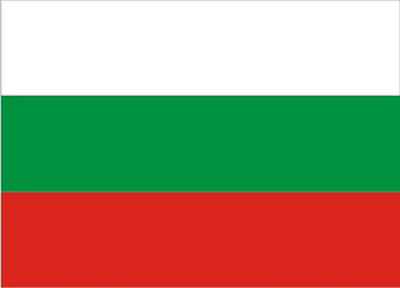 Walking along the mile long stretch between Willesden Junction and Dollis Hill I wondered how many fast food options an area needed. Seventeen fried chicken shops appeared to be flourishing despite the competition. Add to that pizzas, kebabs, Chinese and curry and i began to wonder whether anyone in this postcode ever dined in. Amongst the cuisines vying for custom was the city’s sole Bulgarian offering. I had an inkling of what it held in store as i’d read a few online reviews of the Crazy Cock. It was difficult to discern whether people were being accurate or unkind. This recent trend of restaurant reviewing is a curious one as like disgruntled owls people regurgitate their meals for people to pick over. And for the restaurants they come as a mixed blessing, for while they offer publicity they can also be searingly cynical. In my case I had no alternative so i read with a resigned, detached amusement. If i believed what i read I was in for an evening bereft of hope, comfort or nutrition. But such things are subjective. Or so I hoped.

Entering the Crazy Cock it was immediately clear that this wasn't a Bulgarian restaurant but a Bulgarian themed restaurant. It was like a less charming imitation of Austria’s Tiroler Hut. After a few bemused minutes i realised that they had tried to recreate a kind of Bulgarian pastiche of a Dickensian street scene, with windows jutting from the wall, and crudely painted rustic types gathering kindling below. In Austria such staging would be fun taking us on a flight of fancy to the rolling hills of the Tirol and comely milkmaids bashfully frolicking in the meadows. 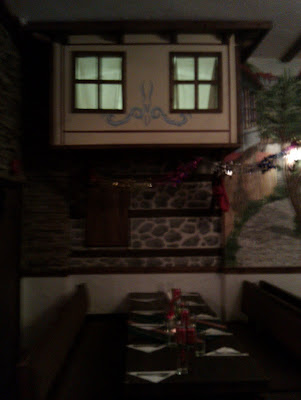 Our preconceptions of the Tirol are warm and welcoming. The same cannot be said for Bulgaria, which is one of the least romantic destinations imaginable. To assume people will want to be transported there is absurd and insane. Instead of being charming, festive and fun it was a little sinister. If everyone was in on the joke it might be different in a kind of 'it's so terrible its brilliant' way but being the lone diner in a vast, dimly lit room I felt the joke was on me. The waitress clearly thought it oddly amusing i had turned up.

Amidst this rather odd never-everland, with walls bedecked with folk costumes and pencil-sketch collages of Bulgarian sprites and folk legends, was a raised stage and a small keyboard. For the Crazy Cock, as the menu declares, is first and foremost a party venue. And a party isn't complete without music. From out of the shadows a portly man in a tracksuit shuffled behind the keyboard, limbered up, and then played the odd chord to accompany a disco track blaring through the CD. If you closed your eyes you could imagine Terry Wogan at the Eurovision song contest in 1993.A centre-spread in the menu showed parties of people dancing on the tables. I concluded that they were either paid or coerced at gunpoint.

Having acclimatised and ordered a Bulgarian Beer I perused the menu. The first three pages consisted of salads, each less appealing than the last. The following pages didn't get much more appetising with dishes such as 'tripe in butter' and 'pork liver, village style' hardly whetting my appetite. Having read that yoghurt was thought to have originated in Bulgaria i went for the regional classic, Tarator, a yoghurt and cucumber soup laced with garlic. Having been a frequent fork and flag visitor to Eurasia i knew that pork would feature heavily in the cuisine. I am becoming an expert i thought as i saw pork in an array of guises, from skewered kebab to casserole. 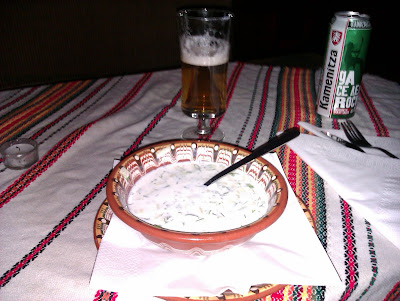 The waitress suggested I ordered a 'babushka hotch potch'. She felt it was marginally more authentic than the 'Monastery style pork'. The Tarator was an acquired taste that after several spoonfuls I had clearly not acquired. The Hotch Potch came in a steaming clay bowl. It was the kind of dish a bachelor would concoct to nurse a nagging hangover. The odd morsel of pork could be found between bits of tomato, potato and mushroom, all doused in a thick, semi-molten tasteless cheese.

After the main course was served I was advised by the keyboard player that a belly dancer was due to perform. It promised to be the least seductive aspect of an evening bereft of romance. Thankfully, i was spared the spectacle as the young lady in question had twisted an ankle en route. As I was contemplating dessert a group of thirty shady men in tracksuits and leather jackets clambered in and sat at an adjacent table. They cackled in a local tongue and rudely admonished the waitress at every opportunity. They ordered bottles of the Rakia, Bulgarian plum brandy, and set about an evening of laughter and dubious transactions. I already felt bored and disconsolate and now I left unease. I left. Quickly.
Posted by Tim Brooks at 20:55

Tim Brooks wishes to be considered the author of this blog. He also wishes he had a more adventurous palate